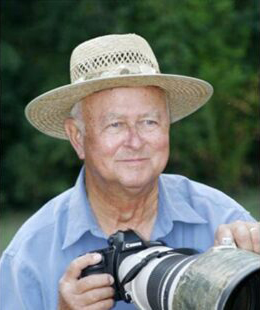 Wendell native Francis Eugene “Gene” Hester worked at the highest levels in the U.S. Department of the Interior for 25 years but never lost his boyhood interest in outdoor life and in sharing it, either on a pond or hunting trail or through his photographs and articles printed in a large variety of publications, most notably Wildlife in North Carolina magazine.

Gene was born July 7, 1931, the seventh child of a seventh child on the seventh day of the seventh month, in the house on the corner of Buffalo and Cook streets in Wendell.  He was named for his father’s brother, also Francis Eugene Hester, who was a lawyer living in Wendell and later in Reidsville, his wife’s hometown.  Gene’s sister, Joan, was born one year and one month later, rounding out the eight Hester children.

The first six children had been born in Knightdale, where Gene’s father – Dr. Joseph Robert Hester, who grew up in Franklin County and Wendell — started his medical practice in 1910.  Dr. Hester married Susie Nelson Finch of Littleton on Jan. 25, 1911, and they began their family a year and a half later with the birth of Virginia.

The house that became known as the Hester House, where Gene grew up, is at the corner of Buffalo and Third streets, the house currently owned by Dale Pixley.  Back then, Wendell was rural enough that you could shoot a shotgun in the backyard.  Gene did that, then ventured out into the surrounding woods.

His father was an outdoorsman and loved to hunt and fish.  Gene remembers going with him on house calls, and along the way they played a game identifying birds.  His father encouraged his outdoor interests and went with him as his time would allow.

Gene’s brother, William, was 13 years older than Gene.  He’d take Gene hunting, fishing and trapping, and Gene credits him with teaching him a lot about woodlore.

Gene attended Wendell School from grade one through 12.  After school, he’d be at the creeks or out in the fields.  He killed his first dove at age 8 and his first deer at age 11; it was raining and he remembers that the rain was dripping off the bill of his hat when he made that shot.  At a young age, he remembers being at Tarpley’s Mill Pond with his father hunting wood ducks and fishing for bass.

While Gene was in high school, he spent his summers mowing lawns for neighbors and priming tobacco for Red Nowell, Bill Fuller, Jerome Raper, Bill Roberts and several others.  Few people wanted to do that type of work, so Gene was always in demand.

He went off to college in 1949 but had no idea what his major would be.  He went to Wake Forest College, then located in Wake Forest, along with friends Fred Sherron and Linville Roach.  He was enrolled in the liberal arts program, but was unsure of his future.

His brother, Mack, suggested forestry, and the two of them went to N.C. State to check it out.  It was there that Gene found his dream major – Wildlife Conservation and Management.  He has said that he “had never even dreamed there was such a program.”

He transferred to N.C. State and earned bachelor and master’s degrees in wildlife conservation and management.  His master’s degree centered on his work in wood duck behavior, with much of the research conducted on his father’s farm pond and on other eastern Wake County ponds.

While Gene was in college, he worked each summer.

After four years, he was offered the opportunity to be the first leader of the Cooperative Fishery Unit at N.C. State where he continued on the faculty although this position was under the Fish and Wildlife Service in the U.S. Department of the Interior.  The year was 1963, and John Kennedy was president.

In 1971, Gene was asked to head up the Division of Fishery Research in the U.S. Fish and Wildlife Service.  The promotion meant a move from Raleigh to Washington.

The decision to move was not an easy one:

But he was challenged by the invitation to transform the Division of Fishery Research, by the trust shown in his ability, and by his desire to work with people to make things happen.

So off he went to Washington as chief of the Division of Fishery Research in the U. S.  Fish and Wildlife Service.

Usually, an expert in fisheries does not have expertise in wildlife – it’s either one or the other.  But Gene had them both — with his undergraduate and master’s work in wildlife and the doctorate in fisheries.  Because of his unique combination of knowledge, he was later asked to become the associate director for research for the Fish and Wildlife Service, a position he held for eight years.

Other promotions came along, all of which sought him out.  During his 25 years working in Washington, Gene held the highest non-appointed positions in three separate divisions of the U.S. Department of the Interior:

As such, he was a member of the Senior Executive Service, a position classification in the civil service of the federal government equivalent to the rank of general or admiral in the military.

Gene received recognition by two presidents:  Ronald Reagan and Bill Clinton.  He received the Distinguished Presidential Rank Award personally from President Reagan in a White House ceremony, attended by his wife and sons.

Other honors have included:

Throughout his career, Gene worked on the interface between career professionals and political appointees.  His supervisors were political appointees.  As a career employee, it was his job to help implement what the new administration wanted to do, while at the same time having it understand laws, existing policies and political realities.  In a real way, he was the bridge between two vastly different worlds.

Gene has said his philosophy is that government is like a sailboat.  You cannot head straight into the wind to get where you want to go, so you end up going this way and that way and eventually get there.

Gene worked with Republicans and Democrats.  He can take pride in the fact that each of the interior secretaries has looked at him as part of the team, helping them go where they wanted to go.

In a political climate where honesty and trust are sometimes hard to come by, Gene says the nicest compliments he ever received were that he is a man of integrity.

Gene retired from federal service in 1996, after serving under eight presidents (from Kennedy to Clinton).  He served under 11 interior secretaries starting with Stewart Udall and ending with Bruce Babbitt.  At his retirement ceremony he commented, “ I have survived being supervised by eight political directors, and if I have nine lives, I want the ninth one to be in retirement.”

he never lost touch with his childhood pleasures in the outdoors and in sharing those pleasures, either on a pond or hunting trail or through his beautiful photographs and entertaining articles printed in a large variety of publications, but especially in Wildlife in North Carolina magazine.

Whether he is sitting around with friends or writing one of his articles, Gene is a master storyteller.  He has a gift for remembering detail and in delivering a punch line.  He always has a story to tell, usually followed by his wonderful laugh.

Gene’s first article was printed in the November 1955 issue of Wildlife magazine.  Since then, he has published 48 cover shots and countless articles and photos in Wildlife.  His work has also appeared in national magazines like Field & Stream, Outdoor Life, National Wildlife, Sports Afield and Life magazine.

His photos have been printed on calendars, used on Web sites, hung in homes, even printed on lottery tickets in Virginia.

A wood duck expert, he has written two books on the subject:

He is considering writing his third book on Hootie, the owl who befriended Gene more than five years ago on a nearby lake and continues to appear on demand.  Hootie soars within arms-reach to retrieve his reward, a flopping fish and is surely the most photographed owl in the world.  When Hootie’s photos and article appeared on the pages of Wildlife, they drew more comments than all of Gene’s other Wildlife articles and photos combined.

Gene has won national awards for his outdoor photography, was selected “Tar Heel of the Week” by the News and Observer, and was the 1993 Distinguished Alumnus of the College of Agriculture and Life Sciences at N.C. State.  In October 2013, he was again recognized by N.C. State, this time as an outstanding alumnus in the area of Applied Ecology.

Gene’s wife is the former Katherine Sherron, who also grew up in Wendell.  The two have been married since 1955.  They are the parents of three boys: